Greatest Moments in the History of Weddings

This moment is great, because Jennifer Lopez and Marc Anthony truly did catch their family and friends off guard with their backyard nuptials.  There are no other pictures that are known or seen publicly, which makes this all the more extraordinary.  I love the idea of completely surprising your guests with a  wedding in a meaningful and personal setting.  Can you imagine the guests who decided to skip the party only to find that it was a wedding later? Mmmmhmmmm!

A King Gives Up His Throne 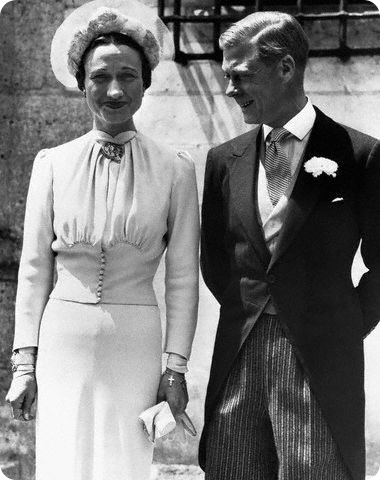 I remember being so captivated by this story in high school (a mere two years ago…UGH perhaps in dog years….).  If you aren’t aware of this unassuming couple, it is American socialite  Wallis Simpson and her husband, Prince Edward, Duke of Windsor.  Wallis was a two time divorcee and as King and the head of the Church of England, the king could not marry her because of the religious complications.  His love for her was so great that he abdicated his throne in order to marry her.  It was his brother, King George that inherited the throne (yes, the one from The King’s Speech) and gave his brother the title of “Duke of Windsor”.  As the wife of a Duke, Wallis was known as a Duchess, however she could not have the “Her Royal Highness” with her name.  But knowing all this, I love their garb for the day: Classic, elegant, and uncomplicated to the point of being understated. 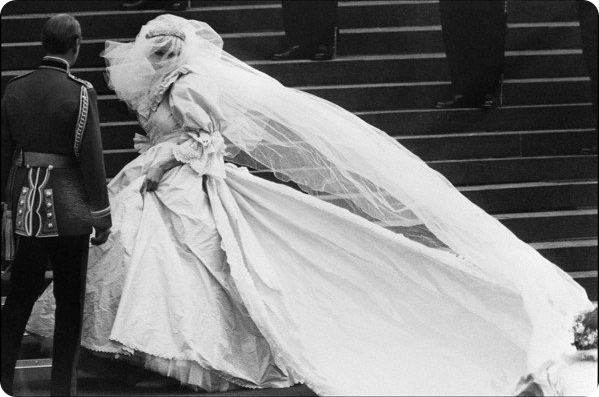 From one royal wedding to another…Princess Diana’s wedding had captivated not only her country, but he world.  Her wedding inspired many weddings of her time and those many years later (Mariah Carey’s wedding with Tommy Mottola was patterned after the royal wedding.  Diana’s wedding made it okay for women to splurge:  her wedding dress was a puff ball meringue wedding dress, with huge puffed sleeves and a frilly neckline. The dress was made of silk taffeta, decorated with lace, hand embroidery, sequins, and 10,000 pearls. It was designed by Elizabeth and David Emanuel, and had a 25-foot train. 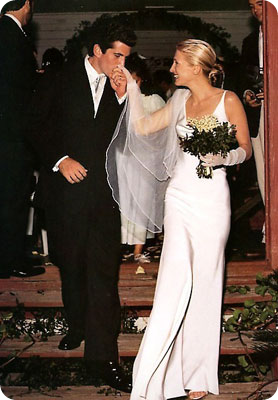 First, this is the best picture ever.  Second, when JFK Jr. finally wed, you heard hearts break across the world.  However, you couldn’t help but to become endeared to his new beautiful bride, Carolyn Bessette.  The evening wedding ceremony took place in the wood-frame Brack Chapel of the First African Baptist Church on the private Cumberland Island (not too far where we are in the St. Simons/Jekyll Island area). What made this wedding so beautiful was its intimacy and timelessness.  Looking at this picture today, you would have a hard time believing it took place over 10 years ago.  Moreover, the intimacy and personal details made it even more special:  the bride wore Jackie Kennedy Onassis’ clip in her hair and her bouquet was designed by the same woman who designed the White House rose garden.  JFK Jr. wore his father’s wristwatch.  Additionally, the church, which had no electricity, was lit with candles and kerosene lamps, and the couple stood under an altar adorned with greenery arranged by Efigenio Pinhiero, Jackie Kennedy’s longtime butler.  The guests were shuttled to Greyfield Inn, where they dined on the couple’s favorite food and watched their first dance to a Prince song.  If for nothing else, this saves them a special place in my heart. 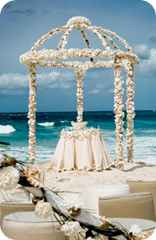 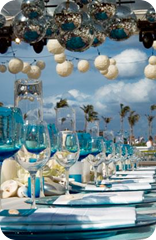 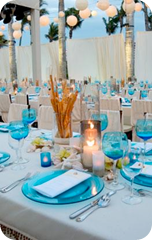 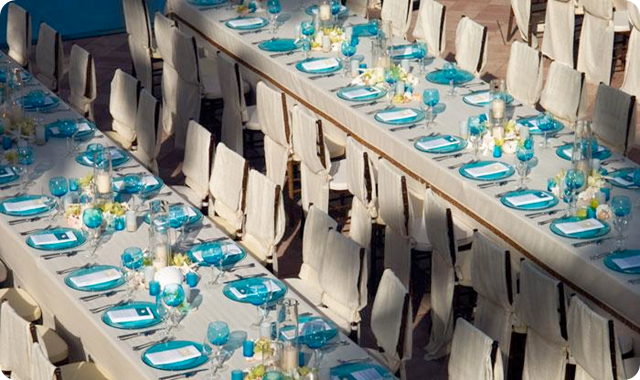 All of these delicious pictures are of Survivor contestants Rob + Amber’s wedding,  created by the illustrious Colin Cowie.  This is a gorgeous wedding which completely revolutionized how beach weddings would take place and be experienced.  The vibrant colors, estate seating, dotted with whimsical, yet upscale, elements into the décor.  After this, many couples began to create dynamic and large events on the beach or nearby. 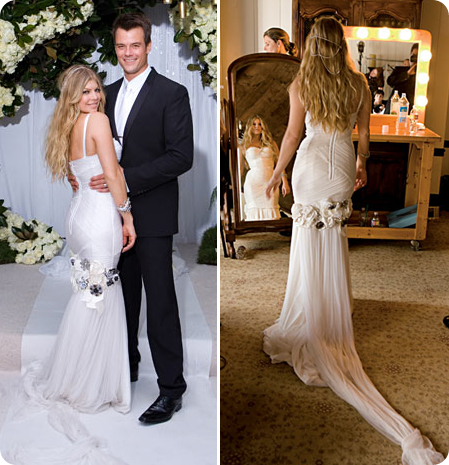 I’ve been a fan of Fergie since she was Stacy Ferguson: 1/3 of Wild Orchid.  When Mindy Weiss planned the wedding for Fergie and Josh Duhamel, it was a beautiful, lush affair.  While this is fabulous in its own right, what made it to the great wedding moment list is what happened during the reception.  A slide show was shown with photos of the couple at different stages in their lives. At the end, Josh surprised Fergie with a video segment of 40 of their closest friends dancing and lip-synching to her hit, “Fergalicious.” The video included a pregnant Rebecca Romijn dancing at her house and Stacey Kiebler and boyfriend Geoff Stultz singing and dancing in the shower.

At the conclusion of the meal, an after party was held in a third tent decorated to look like a Moroccan lounge. The tent included couches and a graffiti mural that read “Fergie Loves Josh.” At one point Kid Rock jumped on stage and sang his hit “All Summer Long,” joined by the bride.  This is a wonderful homage to the significant other to honor their achievements by including your family and friends.  It makes the day all the more meaningful.

If Christina Aguilera’s Christian Lacroix wedding dress in 2005 wasn’t sumptuous enough, it was only surpassed by her talent and generosity.  First, guest received invitations in a silk lined invitation box came a note which read, “While we celebrate the richness of life and all the circumstances that have blessed us in career and love, we are mindful of those who are suffering greatly as a result of hurricanes Katrina and Rita. The best gift you could give us is a donation to any of the organizations helping the stricken citizens of New Orleans.”  Also, during the reception, Christina serenaded her husband with her rendition of “At Last”.  If you’ve never heard her cover of the song, you are missing one of the best covers of Etta James’ classic.  I’ve always thought one of the best things an artistic couple or member of that couple could do is perform or present their art to their significant other at the wedding reception.  Also, Christina’s wedding décor sparked the love for hanging crystals and crystal trees.